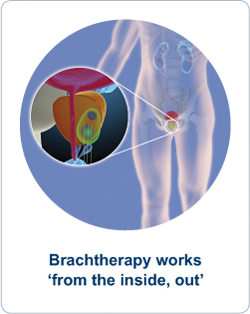 In brachytherapy, radioactive isotopes are sealed in tiny pellets or “seeds.” These seeds are placed in patients using delivery devices, such as needles, catheters, or some other type of carrier. As the isotopes decay naturally, they give off radiation that damages nearby cancer cells.

If left in place, after a few weeks or months, the isotopes decay completely and no longer give off radiation. The seeds will not cause harm if they are left in the body.

Brachytherapy may be able to deliver higher doses of radiation to some cancers than external-beam radiation therapy while causing less damage to normal tissue.

Brachytherapy can be given as a low-dose-rate or a high-dose-rate treatment:

The placement of brachytherapy sources can be temporary or permanent:

Doctors can use brachytherapy alone or in addition to external-beam radiation therapy to provide a “boost” of radiation to a tumor while sparing surrounding normal tissue.